This is a summary of an #ELTchat which took place on 17 October 2018.  @angelos_bollas suggested the topic as he had just come back from the 7th ELT Malta Conference where the IATEFL Young Learners and Teenagers Special Interest Group (YLTSIG) had a prominent strand.  I was there, too, and being a committee member of the Learning Technologies Special Interest Group, I thought I would be well suited to write this summary.  It is the 14th summary I have written for #ELTchat and the others can be found from the tab at the top of my blog.

Angelos stated that when he taught Young learners, digital tools were not a thing, so the whiteboard was the only tech he used.  Likewise, @Teacherphili said that when he taught young learners in Tanzania and South Korea, digital tools were not really a thing. @SueAnnan asked whether we even needed technology with young learners. Why not let them just be kids, she suggested. Phil replied that they can still be kids, but with devices. Angelos stated that he thought kids nowadays are attached to technology – he wasn’t sure if this is positive or not but that he thought it is simply a reality.

It was the first ever #ELTchat for @EFLteacherRunna from Ramallah, Palestine.  It is always good to hear from some new people.  She has recently been involved in the Hands Up Project, which she says has been a great experience so far. She does weekly one-hour lessons with a group of girls living in zaatari refugee camp. They use zoom, which requires very little bandwidth so that helps keep the connection problems down to a minimum.

Runna stated that she think kids expect tech these days. It can be as simple as using Quizlet for vocabulary or Class dojo for a rewards system. Tech can also be used to connect students/classrooms from around the globe as an alternative to traditional pen pals.

Angelos asked whether this was difficult to manage. Unless there is a specific platform which is safe, right?  Runna replied that there are options like @EmpaticoOrg depending on the level of the students. The HandsUpProject also tries to connect classrooms sometimes. I think it depends on how you do it and you have to get parental permission of course. Angelos and Phil both stated that it was a great initiative, involving storytelling, young learners, a worthwhile cause and they need more teachers to get involved.

@natibrandi stated that she thinks that kids expect games! A good old plemanism, may be just as effective as Quizlet. The key is keeping them busy and interacting with the language, they don’t want to just sit and listen. Runna agreed totally with this. She thinks it is about balance between using technology and some tried and true activities, before adding that edpuzzle.com is a tool that she recently learned about. You can add questions to videos to check their understanding as they watch.

Digital tools used with YLs must be suitable for their age group, stated ‘Free Spirit’ chatter a.k.a. @teachingright.  Angelos asked for clarification on this. ‘Classdojo’ for classroom management & ‘storybird’ for teaching writing, replied @teachingright. They are easy and suitable for them.  In addition, Animoto and Kahoot! Teachers can create puzzles or any interesting game for kids. Animoto is an app that they could use to create wonderful videos. An app called ‘Chwazi Finger Chooser’ was also suggested – in an observation by @teachingright the kids like it and can help with classroom management.

@sergiolm21‏ (Sergio Lorca) said that he sometimes uses Plickers to review at the end of his lessons. He really likes it because the students don’t need to have a mobile device, and also they keep a scoresheet with the answers. Genially is another tool which can be used both for young learners to use in class and for teachers to help with their preparation. You can create a gamification (board game, escape game, etc), work a specific skill or topic and use it in class, he added.

@natibrandi stated that she thought that the traditional ‘I teach – you listen’ model does not work at all with Young Learners, which is why rather than thinking about what we’ll do, planning lessons based on what they’ll do!  A good one is Lyrics Training.  Some kids love listening to songs, and they can get exposure and practice … also dubsmash, excellent to mouth the perfect pronunciation, and see it very much as a physical thing. Runna added that her students love this site. One person can type and the others shout out the lyrics as they listen, she stated.

My problem with tech in the Young Learner class, stated @natibrandi is that she sometimes find it leads to dead time, and dead time causes behaviour issues in class… the dead time, whilst you set things up, or when problems with wifi arise.  Runna replied that is true. She has not taught young learners in nearly a year but used to try to have things set up beforehand or while they’d be working on something else. Nati added that she did not think it counts as an app, but going round the school, taking a photo of (something related to a project), come back and describe it until the others guess, things that keep all the students busy, I reckon work best, and this does not always happen with some tools. Basically, good old information gaps, but using technology to enhance use and meaning.

@grajuretich chipped in with a comment that ‘Technology as a means and not as an end. The curricula should be better adapted, both in primary and secondary levels.’ Angelos wondered if anyone present who argues against Digital Tools with YLs? Some of you discussed Tech as a means, not an end but what about ‘no tech at all’?  Nati replied that she loved having moments of no tech at all.. “I’m not saying that’s the way we should teach.. but a few classes with no tech at all… with good all games like spongy letters, a nice board race, grass skirts, and genuine unplugged fun, is something I love.. good old games.”  @ClareBurke_ELT wouldn’t argue against it but “if I am asked to teach in a school where there is not even 1 PC available to teachers then of course I’d argue against it! Also if you have the tools there may be little value if they’re not used safely.”  Meanwhile, @LahiffP stated that it “depends on how young the learners are. Under 7 then none at all is a good move. 7 – 10 only limited. 10 – 12 tightly controlled.”

Angelos asked whether using the affordances of their own tech (in this case their smartphones) is also useful. Do young learners have smartphones, though, he wondered. Nati replied that in Argentina, they do, and in my context (mid upper class) those who don’t, have an Ipod. The school could also have sets of tablets… sometimes more effective than interactive boards because actually these can be used to keep students interacting with the language and occupied. Angelos replied that he believed using the school’s tablets is much more effective and, possibly, safer for our students. Nati agreed, saying ‘Definitely!’ Her school doesn’t have tablets nor interactive boards… not even good wi-fi! but she does use her students’ devices… now if you have tablets… that’s heaven, she concluded. It’s also important to spend time setting rules around their use and checking their settings first, added Runna.

Taking photos and that kind of thing is really useful, stated Runna. You can also make a scavenger hunt. Give them a list of things to search for and they take pictures of the things they find, which Nati loved the idea of.

@vickysaumell has recently given a talk on this too, according to Nati, and she knows that she has been working with augmented reality and other projects. Phil knew this, too, and offered a webinar recording that Vicky did for Cambridge University Press on digital tools in the young learner classroom.

Phil shared some apps, such as Learn School Words, and Animal Sounds for Kids, which were suggested, outside of the chat, by @Rach_Ribeiro, which are listed below. He also made a reference to a recent session by Gary Motteram on teaching English in challenging circumstances, including Zaatari Refugee camp in Jordan.

Institutional support can come in many forms. From training to actual devices and upkeep of the devices. But what about safeguarding and child protection? asked Angelos.   It should be the role of the institution to put the proper procedures in place, make sure teachers fully understand them, that they’re communicated to parents and students, according to Runna. Sergio agreed that with the view that technology can be way to communicate with parents. In his school we are using Telegram in order to inform the families. From the school we send info to them but they can not answer, it’s one way.

Like Vicky Saumell, @jenjdobson added some very useful comments in the after chat ‘slowburn’. To begin with #safetyfirst should be the mantra for any online work, she stated, in fact any work, with Young Learners. There are some recommendations on the IATEFL YLTSIG page here. Once you are aware of the potential dangers then look at tools and apps with safeguarding in mind. Can add some of the ones I used during the ELT Malta council conference during the course of the day if you like? The talk was for Early Years, but they all work for all Young Learners. @teachingright already mentioned Class Dojo.  I love using the Class Story section. This can provide a ‘window to the class’ through generating safe codes for parents/caregivers without the need for any shared mail accounts. @TinyTapit is another fabulous tool. You can create a game with learners safely and collaboratively. Try getting older learners to teach the younger ones.

Angelos commented towards the that it is very encouraging to see teaching Young Learners getting the attention it deserves! It was a great chat which took a little while to get going, as a lot of them often do, but by the end we had quite a good number of resources.  Here are all the links shared in relation to this chat:

Storymaker – A recording of an OLLReN session by Dr. Vanita Chopra & Harsha Jaisinghani who demonstrated how they used Storymaker in India with Young Learners.

Teaching in Zaatari Refugee camp – A recording of Gary Motteram’s session at OLLReN.

‘Using technology with young learners’ – A post on the Cambridge University Press blog by Sedef Koç.

‘Digital tools in the young learner classroom’ – a webinar by Vicky Saumell for Cambridge University Press.

The Hands Up Project

A couple of chatters shared this upcoming event on 4 November put together by the YLTSIG.  I’ll be joining in, not as a speaker, but as a viewer.  I can recommend it. 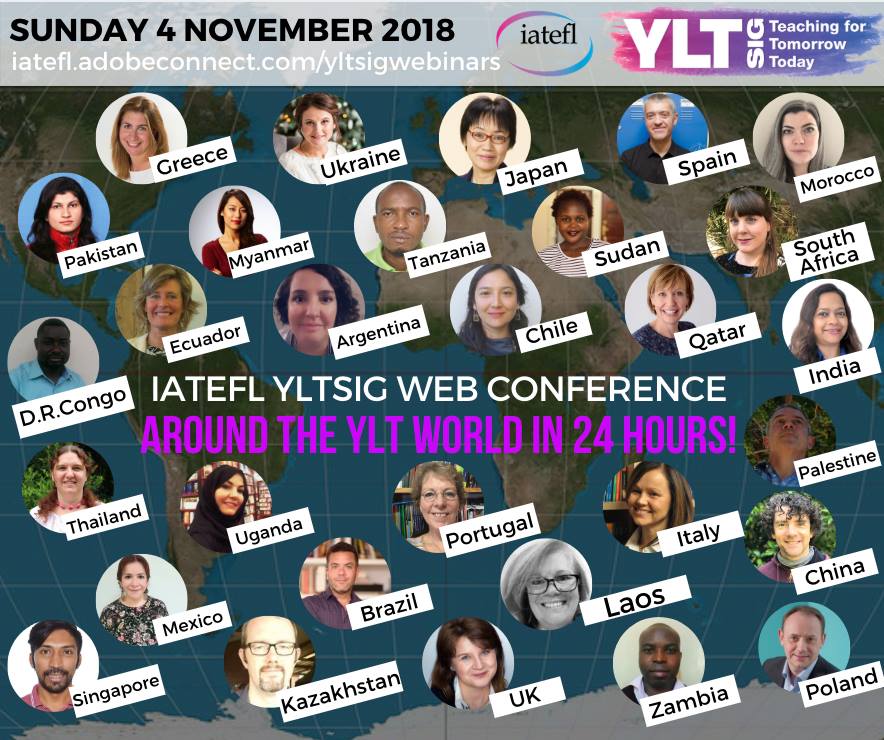